The Elegance of Creativity 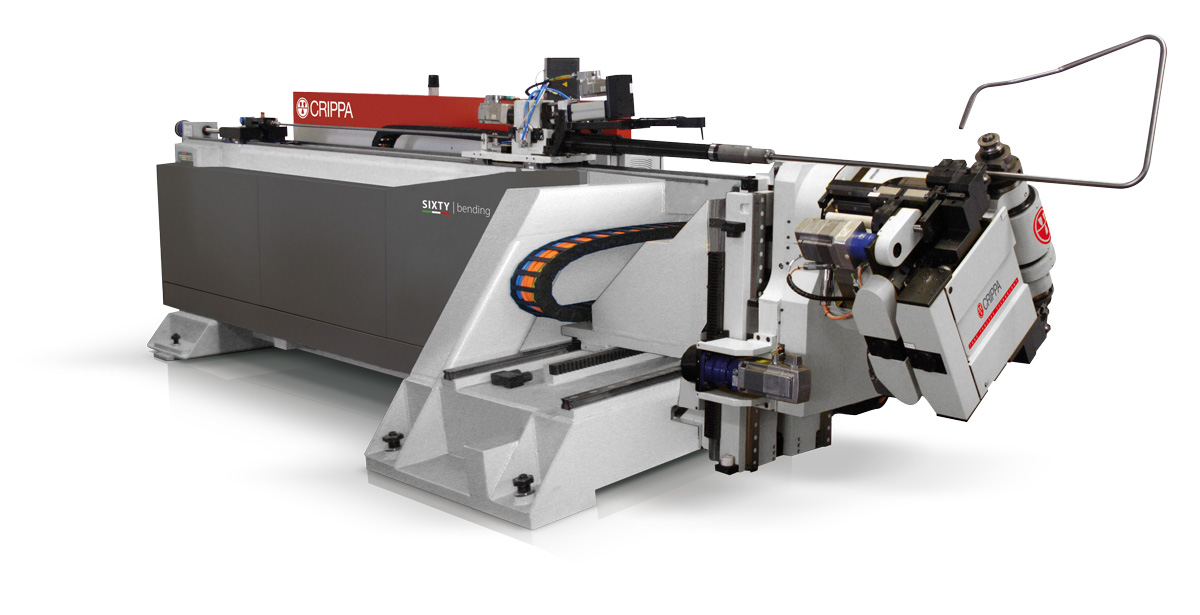 The SIXTY tube bending machine is a special model in the UP&DOWN series. It combines the traditional cross movement of the head with a rotational movement, giving it unique versatility and flexibility.
This fully electric tube bending machine makes it possible to load the tube directly in the slot in the bending former, and to use the loading grip with the arm closed and with the arm open. In addition, the operator can decide how to direct the tube in the space during work, eliminating, if necessary, the risk of interferences both with the machine and with any external structures, or even by always bending upwards.
Right and left in an integrated cycle, thanks to the peculiar configuration of its bending head. The SIXTY has 11 axes, activated by absolute servomotors, with “Full Electric” digital technology, manages by CNC Siemens 840D sl.
Multistack and multiradius, just like the other models of the UP&DOWN series. The SIXTY is also characterised by high quality of production, energy savings, and reduced set-up/start-up times, which make it possible to reduce scrap.
The clamp and pressure-die are asynchronous: when the upper plane moves forward, the lower one moves back, and vice versa. While the motors on the slides are re-positionable, to avoid collisions with the tube during work. The machine’s efficiency is also confirmed by the dynamic plane positioner, which limits damage in the case of accidental collisions with the components.
The high production rate, wide range of accessories for specific processes with which it can be implemented, and the ability to produce bends with a CLR/DIA ratio lower than 0.8 or thrust bends with variable radius make this machine suitable for use in sectors where efficiency and productivity are prime requirements. This tube bending machine is also equipped to be built into work cells.
Energy savings and maximum productive efficiency are also guaranteed by pneumatic balancing, which makes it possible to use a machine that is smaller, but with higher performance levels.
The SIXTY has a three-dimensional graphical software on a 19” LCD touch screen, from which the operator can interact with the machine simulating and optimising tube bending programs. The UII (“User Iso Interface”) facilitates programming, making it possible to simulate and optimise the bending programs. The SIXTY is designed to be integrated into Smart Factory systems.

To each his own tube: simple and complex processes to meet every need.